You can reach the training venue from your hotel based in Karditsa either on foot as it is in the middle of the town or by a taxi shared between participants.

For your Erasmus training course, given it will concern with the use of technology in education, you are kindly requested to bring with you the following equipment to maximize your learning:

Our tutors will guide you for your training purposes. Kierion Hotel
For the duration of your Erasmus LTTA visit to Karditsa, you will be accomodated in Kierion Hotel. How to reach Karditsa: your Erasmus LTTA destination

Karditsa is in the heart of Greece and easily accessible. A drive from Athens takes about 3 hours (330 km) and a drive from Thessaloniki takes about 2 hours (212 km). The highway connecting all three cities is modern and comfortable.

Flights to Athens and public transportation to Karditsa
The Athens Eleftherios Venizelos International Airport is located 27 km east of the city of Athens. A large number of European and International carriers fly direct into Athens. The airport has excellent public transit connections to the city. From the airport you may use:
– Metro service
– Bus service
– Taxi

Athens to Karditsa:
– By intercity train: From the Athens airport, using metro or taxi (not bus), you should get off at “St. Larissis” (on the red metro line) and get a train ticket to Karditsa. You will need to change over at the stop of Palaeofarsalos (same ticket). For more information on the train service: https://tickets.trainose.gr/dromologia/

– By intercity bus: From the Athens airport, using bus X93 (link) or taxi (not metro), you should get off at “LIOSION BUS STATION” and get a direct ticket to Karditsa. The bus schedule for Karditsa-Athens and Athens-Karditsa (weekdays and weekends): https://www.ktel-karditsas.gr/en/dromologia/uperastika-therina/karditsa-athina

Although all training will be provided in English, as you will be exploring Karditsa for a few days, you may indeed have a richer cultural experience if you learn a few common Greek words. You can get an overview of such terms through this link.

What to pack when visiting Karditsa at this time of year

Places of interest around Karditsa

It is built close to tributary of Peneus River, in an area perfect for commercial contact between the plain and mountain area (31.000 inhabitants). This is one of the reasons why it is the rural center of Thessaly products (cotton, wheat and products of cattle raising) collection and distribution. With its two big squares, the huge park and beautiful pedestrian precincts, Karditsa gives to its visitors the opportunity to go around the city by bicycle (it has a wide network of bicycle streets) and enjoy its beauty.

Near Karditsa (about 30km) there is an artificial paradise for every season of the year. Lake Plastiras, also known as “Little Switzerland”, is surrounded by an idyllic landscape of incomparable natural beauty that captivates the mind at first sight. Dreamlike in all aspects, it is one of the largest artificial lakes in Greece created in a location where in antiquity we could find the confluence of the rivers Tavropos and Achelous.It is a natural wonder that owes its existence to the inspired vision of General Nikolaos Plastiras (rightfully named after him) to create an impressive dam that would reinvigorate the entire region. Lake Plastira located in the wider area of Agrafa, lives every season at its fullest, promising to offer you the holiday you dreamed of. The grandeur of the lake is crowned with the surrounding alpine peaks; snowcapped or green, with rushing streams that flirt with lacy coves, narrow inlets of water between cliffs that create fjord-like scenes and a single luscious green islet in the middle create a mind-blowing landscape which is mirrored in the emerald waters of the lake. In the vicinity you can find a handful of charming villages situated along the lakeshore or on the mountainous slopes which offer you an idyllic view of the lake! 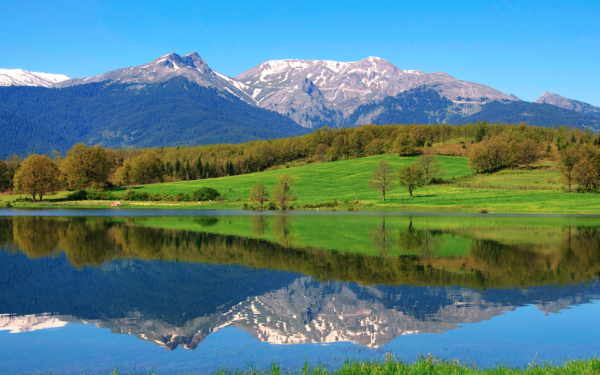 Last but not least, Meteora is about 50 km from Karditsa. Pillars of rock, sculpted by prehistoric rivers and crowned by otherworldly monasteries, monuments to the power of faith. Meteora means ‘suspended in space’. Your first, second and third sight of these impossibly tall, vertical rocks will have you gasping in disbelief. But it’s not just the incredible geology that stretches your imagination. It’s the monasteries balanced on these pinnacles. How did they get there? The monks who built them were the original rock climbers, lifting the materials up with pulleys, nets and their bare hands. Today, fans of the sport come to Meteora from the world over, to pit themselves against these gigantic rocks. Unesco has declared Meteora a World Heritage Site. The Greek state calls it a sacred spot, inviolate and immutable. You’ll no doubt come up with other adjectives to describe Meteora, this wonder of the world.

The Central Square of Karditsa, and the “Pallas” building

Karditsa is a city in western Thessaly in mainland Greece. The city of Karditsa is the capital of Karditsa regional unit. Good layout, spacious squares, Pausilipo park, pedestrian streets, bike lanes are the trademark of Karditsa. The city of Karditsa, on the west end of the fertile Thessaly plain, is a modern administrative, financial, commercial and cultural center. Also of architectural interest are the “Pallas” building (in place of the historic Karditsa Hotel “The Beautiful Hellas”), which has been the city’s most important entertainment venue.

Pausilypo Park is the first urban public green space the city acquired, just twenty years after Thessaly was annexed to the Greek state, is a reference and meeting point for the citizens of Karditsa. The creation of the 165000 m2 park, designed by engineer G. Foskolos (1901), was initiated by Mayor Stergios Lappas, who has linked his name to other infrastructure projects. The Archaeological Museum, built on the site of the old hospital of the city, contains representative findings of the area, dating from the Paleolithic and Neolithic ages to the late antiquity.

The Municipal Art Gallery of Karditsa, founded in 1993, contains representative paintings of remarkable artists, who have connection or origin from Karditsa but also from the wider Thessaly area. 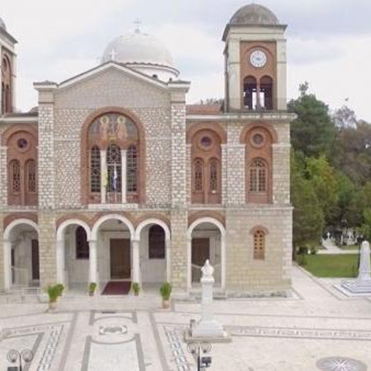 Church of St. Constantinou and Helenis Arni Hotel, a magnificent neoclassical mansion of 1921 (the two floors of the building served hotel needs from the beginning, while the ground floor functioned as a cinema, theater and ballroom).

Useful information whilst in Karditsa

This event is been funded with support from the European Commission. This page reflects the views only of the originator and the Commission cannot be held responsible for any use which may be made of the information contained therein.